How to start with Rakuten NFT! How do I register and buy, and how is it different from other NFT markets?

Rakuten Group, one of the largest Internet service providers in Japan, made a big splash when it entered the NFT market.

The Rakuten NFT marketplace is operated by Rakuten and is very easy to understand and use. On the other hand, there are some disadvantages that make it different from other NFT marketplaces.

In this article, we will explain its features and purchase method with images for those who want to start using Rakuten NFT.

What is Rakuten NFT?

Rakuten NFT is an NFT market platform operated by Rakuten Group. It allows users to issue, buy, and sell NFTs related to various fields such as animation, music, and sports, and the service is operated especially for the Japanese domestic market. Here, we will explain the features of Rakuten NFT.

What exactly is an NFT?

NFT allows users to identify which data is the original by assigning a kind of unique serial number to each of the digital data of documents, images, and music, which until now have been taken for granted as being easily copied.

The same “blockchain” technology as bitcoin and other virtual currencies is used to manage this data.

One of the major characteristics of NFT is that digital data now has asset value because the real thing can now be distinguished.

Even in the case of real paintings, original genuine works are very valuable, whereas imitations and reproductions are traded at a lower price.

To learn more about the features of NFT, please refer to the following article.

関連記事
How to start with Rakuten NFT! How do I register and buy, and how is it different from other NFT markets?

Rakuten Group, one of the largest Internet service providers in Japan, made a big splash when it entered the NFT market[…]

NFT technology is currently being applied in a variety of fields, including art, music, and games.

Rakuten NFT has a very low hurdle to purchase compared to other NFT marketplaces.

What features does RakutenNFT have that make NFT easy to handle?

We will explain the advantages and disadvantages when compared to other NFT marketplaces.

Easy to use with Rakuten ID

Rakuten NFT can be used immediately by simply logging in with Rakuten ID, registering a nickname, and agreeing to the terms of use.

Most NFT marketplaces require users to create a virtual currency wallet such as MetaMask before connecting to the site, which has the disadvantage that the process of creating a wallet is complicated and can be dangerous if the password is leaked.

With Rakuten NFT, however, users do not need to create and manage a wallet because their NFTs are managed by Rakuten.

It is recommended to purchase your first NFT with Rakuten NFT, which has a low hurdle, and then step up to create a virtual currency wallet when you become interested or familiar with the service.

Another major feature of Rakuten NFT is the ability to accept credit card payments.

As mentioned earlier, there is no need to connect a virtual currency wallet.

There are various virtual currency exchanges, but in some cases, there are fees for purchases, and in others, gas fees (fees for virtual currency transactions) are required for transferring money to the wallet.

Earn and use Rakuten points

You can also use Rakuten points for purchases at Rakuten NFT. Rakuten allows you to earn points for a variety of services, with a relatively high redemption rate. The ability to use your points to pay with a credit card and use your extra points makes it even easier to purchase NFTs.

There are many types of “blockchains” that ensure the non-substitutability of NFTs and are operated separately.

There are several advantages and disadvantages here. Let’s look at them in turn.

The “low cost of operation” is due to the fact that the transaction processing, which prevents unauthorized copying, does not require huge costs.

There are several different blockchain management methods, including the PoW (Proof of Work) method, which uses many computers to prevent unauthorized copying and consumes a lot of power to operate.

Rakuten NFT cannot be used by ordinary computers to tamper with the data in the blockchain, so it requires fewer computers and can be operated at low cost and low power consumption.

In addition, “the system is easy to improve” is due to the characteristics of the blockchain update method.

In a typical blockchain, any attempt to improve the system requires the majority of the computers processing the blockchain to agree to it.

While this has the aspect of preventing unauthorized updates, it also raises the hurdle for making good updates. On the other hand, since the Rakuten NFT blockchain is managed by Rakuten, the system can be improved and refined by Rakuten itself, and it is easy to reflect the opinions of NFT owners and fans.

Proprietary blockchains also have disadvantages. The major ones are “dependence on Rakuten” and “no connection to other blockchains.

Dependence on Rakuten” means that if Rakuten goes bankrupt or stops handling NFT, for example, the ownership of NFT itself may disappear.

Although Rakuten is one of the largest and most trusted Internet service companies in Japan, the fact that it is completely dependent on the management of expensive NFTs is a major disadvantage.

Another disadvantage is that it is “not tied to other blockchains.

In general blockchains, some virtual currencies and NFTs can be converted to and from multiple blockchains. However, the Rakuten NFT blockchain officially states that tokens cannot be transferred outside of the Rakuten NFT, which makes the scope of using NFTs very narrow.

Explanation of how to use Rakuten NFT with images

From here, we will explain how to use Rakuten NFT specifically.

First, let’s look at how to register.

Rakuten NFT can be easily registered by using Rakuten ID. If you do not have Rakuten ID, please register with Rakuten first.

While logged in to Rakuten ID, click “Login / Member Registration” from the top page of Rakuten NFT.

You will be taken to a screen for registering a nickname and agreeing to the Terms of Use. Note that once a nickname is set, it cannot be changed.

You are now registered with Rakuten NFT. If you can access My Page from the icon in the upper right corner, you are logged in.

Purchasing in the Private Marketplace

Now, let’s actually buy NFTs. to purchase NFTs, you can use the “Private Marketplace”. Select from the menu at the top to go to the page.

The same NFT may be exhibited more than once, and this piece has an “Issue Count” of 10, which means that there are 10 originals. Also, the “Number Available to Buy” is 4, indicating that there are 4 out of 10 NFTs on display.

Below that, the “Minimum Price” is 90,000 yen, so the lowest price of the four pieces on display is 90,000 yen, which is the minimum purchase price. To purchase a piece, click on “Select and Buy.

You will then be taken to a screen where you can select which of the four pieces on display you wish to purchase.

In addition, each of the 10 NFTs issued has a serial number assigned to it, although there is no difference in the images. The one listed at 90,000 yen, the lowest price, is #10. In some cases, the value of NFTs increases if the serial number is young or if the number is a close match, such as a zoro-yakuji (zero) number.

After selecting the NFT you wish to purchase, click “Add to Shopping Cart.

Confirm that the NFT you wish to purchase is in your shopping cart and click on the “Proceed to Purchase” icon.

The purchase method and other information will be displayed. After confirming the information, click “Confirm Order” if there are no problems.

The owner’s data will be rewritten by purchasing NFTs, but it may take some time for the data to be written on the blockchain. It may not be reflected immediately, but do not be impatient. 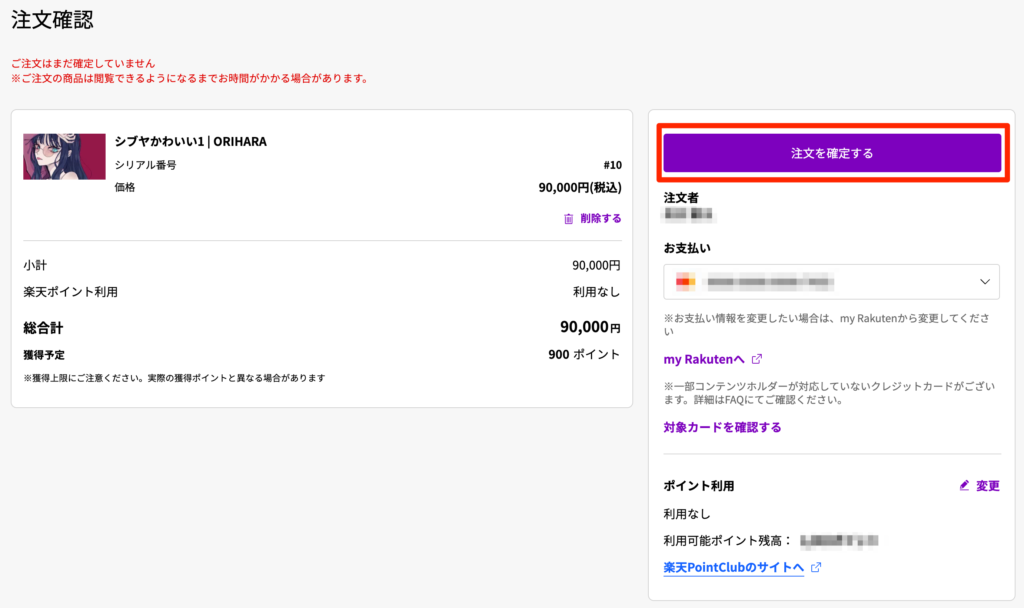 Listing on a private marketplace

Purchased NFTs can also be listed for sale. To list an item for sale, first select “My Page” from the top right corner of the page.

On My Page, you can check “Transaction History” and from here select “View Moments” for the NFT you wish to list.

Here you can check the details of the NFT you own, and click the “List for Sale” button on the right side.

Since it is possible to change the selling price or cancel the sale until the item is purchased, please consider the compatibility with the sales commission before listing an item on the market.

When you list an item for sale, the status of the NFT will change from “Holding” to “Listing”.

So far, we have explained how to register and purchase on Rakuten NFT.

Compared to other NFT markets, it is much easier to register and purchase, so it is recommended for NFT beginners, but on the other hand, it has a drawback that it is a blockchain closed within Rakuten.

We want to get out of this! If you are a beginner, please try to create a virtual currency wallet or purchase on overseas markets such as OpenSea.

関連記事
MetaMask Usage Manual! Complete explanation of how to get started and how to set it up.

Want to start NFT, but don't know how to set up MetaMask... We’ll start an explanation for it! For those who are int[…]